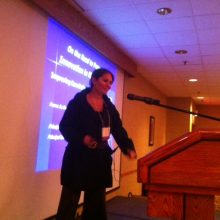 A Suicide Screening Tool for Everyone

Dr. Kelly Posner collaborated with a team of scientists to create the Columbia Suicide Severity Rating Scale (C-SSRS), a screening tool which a diverse range of communities in the United States have now adopted. She spoke at the Maine Suicide Prevention Program’s conference on March 21, 2013, “Taking Science into Practice: Beyond the Basics in Suicide Prevention.”

“This is one of our greatest public health epidemics,” Posner said. “It has surpassed car accidents as the number one cause of mortality [in the United States].” She cited shocking statistics about the growing frequency of suicide among African-American teenage girls, police officers, prisoners and the military.

Accurate screening can help prevent suicide. Posner said her team designed the C-SSRS to “fill a gaping hole in the field.” Pre-existing screening tools were inadequate and often did not cover the full range of suicidal behavior. They also led to false positive results because they included self-injury and thoughts about death.

One doesn’t need to be a mental health professional to use the C-SSRS, Posner said. She told the story of a grandmother at a Hindu temple in upstate New York who used the screening questions to save her grandson’s life. The local Hindu community had participated in a C-SSRS training.

For some audiences, Posner’s team adds specialized questions to the C-SSRS. Some of these questions are socioeconomic. Since suicide rates spike during periods of high unemployment, economic conditions make a difference. Posner’s team has also added questions about gang membership in some situations.

A diverse range of states and organizations have begun using the C-SSRS. These include Native American tribes, military organizations, correctional institutions, state governments and religious groups.

Visit the link below to see a video of Posner describing the urgency of the suicide crisis.