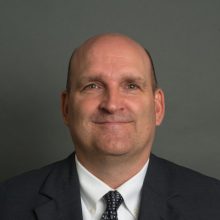 Dr. Cyr is a native of Maine and went on to the University of Rhode Island completing a Bachelor of Science degree in Pharmacy and Zoology. He obtained a masters in Cell Biology and a doctoral degree in Pharmacology from New York University while studying the desensitization of Endothelin receptors. Dr. Cyr completed two National Institute of Drug Abuse Post-doctoral fellowships at NYU and the University of Washington studying opiate receptors before returning to Maine in 1996. He then spent three years at Maine Medical Center Research Institute as a post-doctoral fellow conducting research on the signal transduction pathway of Fibroblast Growth Factor receptors. From there Dr. Cyr spent eight years as the Chair of the Pharmacy Technician program at Southern Maine Community College before accepting the position as the Associate Dean for the College of Pharmacy. In June of 2014, Dr. Cyr transferred to the College of Dental Medicine as a Clinical Professor. Dr. Cyr has been a licensed pharmacist since 1988.