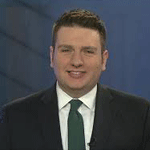 David has been recognized for his reporting on important issues in Maine, including the state’s drug epidemic and sexual abuse allegations involving two retired Biddeford police officers. Reporting on those stories earned David three Emmy nominations from the Boston/New England Chapter of the National Association of Television Arts & Sciences.

The Maine Association of Broadcasters has recognized David for his investigative work and for his coverage of Maine’s heroin epidemic.

David is no stranger to New England. Born and raised in Massachusetts, he graduated from Boston University, where he studied journalism and American studies. He earned a master of science degree in journalism from Northwestern University.

In college, David interned in the newsrooms of WBZ and WMTW’s sister station in Boston, WCVB. He later worked at WHDH as a writer.

When not following the news, David likes to catch up on his DVR, tweet and work out. He also volunteers with the Boys & Girls Clubs of Southern Maine.

David is a member of Investigative Reporters and Editors and the Society of Professional Journalists.