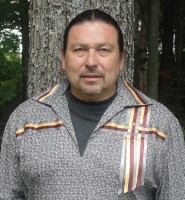 On a secluded Down-east Indian reservation in a community of traditional language speakers, Roger Paul was born the 14th child of a Passamaquoddy mother and a Wolastoq father. Around 6 years of age, Roger, his siblings, and the other Native children in his community were required by the Catholic church to learn English and to discontinue speaking their language. Many of Roger’s older siblings had been sent away to the residential school in Shubenacadie, Nova Scotia. To escape the residential schools, Roger moved often between the US and Canada and was raised by many relatives. He was one of the fortunate Native children who escaped the wrath of the residential schools.

Always moving from one Wabanaki community to another, Roger learned to speak various dialects of the Wabanaki Languages. Growing up in his Culture and Language he understood that his responsibility was to pass this on to the future generations. Presently working on his masters degree in linguistics at MIT he has been, and will continue to teach language, culture, and history of the Wabanaki Peoples of Turtle Island and their vital role in the communities in which they are ever-present.