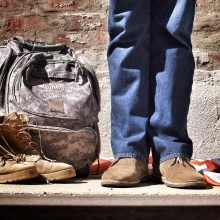 The Invisible Wounds of Combat PTSD

What challenges do soldiers face when they develop PTSD and traumatic brain injuries? On March 21, 2013, Hahna David Patterson, director of psychological health at the Maine National Guard, described combat PTSD to an audience of mental health professionals at the Maine Suicide Prevention Program’s annual conference, “Taking Science into Practice: Beyond the Basics in Suicide Prevention.”

“More often than not, the wounds are invisible,” Patterson said. Many soldiers are reluctant to seek treatment.

However, seeking help may be exactly what soldiers need to do. Patterson said research shows social support helps people recover from PTSD.

“Most soldiers think they would get better going into a cemetery and swinging a dead cat than seeing one of you,” Patterson told the therapists and clinicians in the audience. He said soldiers tell themselves, “‘What’s talking to some nutcracker going to do for me anyway?’”

These physical symptoms occur because trauma gets locked in the body, Patterson explained. While service members are facing gunfire or explosions overseas, they do not process the trauma immediately. They are focused on survival.

“The body keeps the score,” Patterson said. “Combat PTSD has a delayed onset.”

A survey of service members showed 65 percent of the respondents were reluctant to ask for psychological help because others might see them as “weak.” Many respondents were also concerned their leaders or peers might treat them differently if they sought treatment.

Reluctance to seek help may contribute to the high levels of suicide among military personnel. Only half of the service members who need mental health treatment are seeking it, Patterson said.

Since the wars in Iraq and Afghanistan began, the military suicide rate has skyrocketed to around twice the civilian suicide rate, Patterson said. Before these wars, joining the military actually reduced people’s likelihood of committing suicide.

“We have had more suicides in the military than combat losses,” Patterson said.

Many of the military personnel who commit suicide have no observed history of mental health problems. Most of them do not talk about self-harm before committing suicide either. The triggers are often life events such as family conflicts, legal issues, career problems or financial challenges.

When soldiers return from tours of duty overseas, they lose their sense of having a mission and a community. This loss of meaning can make it very hard for them to reintegrate into civilian work and everyday life. “They miss the war,” Patterson said.

“No one returns from combat well-adjusted,” Patterson said. But, for most people, the stress of combat is subclinical. 18.5 percent of returning troops meet PTSD or depression criteria. 19.5 percent meet the criteria for traumatic brain injury, a condition which can reduce their cognitive and emotional capacity.

People whose childhoods were abusive are more likely than others to develop PTSD, Patterson said. Also, situations that are morally ambiguous or emotionally horrifying are relatively likely to trigger PTSD.

But there is good news for soldiers with PTSD. “It can and will get better,” Patterson said. PTSD symptoms tend to taper off during the first year after the event.

What solutions does Patterson recommend for suicide prevention? As an initial step, he says, each soldier who is at risk for suicide should turn in a gun to his or her psychotherapist. Most soldiers own multiple guns, but the act of turning in a weapon to a mental health care provider can show their commitment to seeking treatment rather than harming themselves.

“Having them give you their weapon creates a psychological shift,” Patterson said. He acknowledged this idea might be controversial among mental health care providers, though.