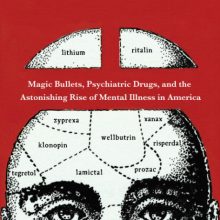 The Pitfalls of Psychotropics

Has mental illness become an epidemic in the United States? Robert Whitaker, a science journalist and author specializing in mental health, says the answer is “yes.” He will speak at CCSME’s upcoming conference, “Innovative Solutions for Building Recovery with Alternatives to Psychotropic Medication.”

Whitaker wrote a peer-reviewed article, “Anatomy of an Epidemic: Psychiatric Drugs and the Astonishing Rise of Mental Illness in America,” which outlines the story of this disaster. His research shows that mental illness has increased fourfold in the United States since 1955 – the year when Thorazine, the first modern psychiatric medication, was introduced. Although hospitalization rates have dropped, disability due to mental illness has skyrocketed.

Whitaker cited many studies showing people who have symptoms of schizophrenia in the United States become more likely to have relapses once they have been on neuroleptic medication. In contrast, people in developing nations who experience schizophrenic symptoms are less likely to be medicated. They also experience better long-term outcomes.

There has also been an upward trend in disability since the introduction of Prozac, Whitaker said. The effectiveness of antidepressants is questionable, Whitaker says, and their use leads to long-term mental health problems. Antidepressants tend to trigger mania and psychosis.

Benzodiazepines also cause long-term problems when they are used to treat panic attacks. The medications alter clients’ mental functioning to a point where they become likely to relapse later.